Being that DLP Experts lives in the data loss prevention world, we keep constant tab of the DLP marketplace. We monitor the ebbs and flows, births and marriages, and yes even the deaths. For many years, there was an identity crisis of sorts, with many different types of products claiming to be “data loss prevention.” To show the extent of this identity crisis, I like to turn back the clock to 2011 with this graphic pulled from the website of an office warehouse store, purporting to show 3009 (yes, that’s three-thousand and nine) “data loss prevention” products: 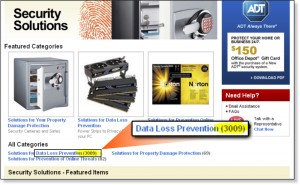 Among these DLP products included privacy filters for your display, external hard drives and encrypted USB thumb drives. All products that can help prevent data loss, but from a security practitioner’s viewpoint, certainly not DLP.

Since 2011 DLP Experts has used the annual RSA Conference expo floor as a barometer of the DLP marketplace at large. Not only has the RSA Conference grown since 2011, so has the number of companies claiming data loss prevention capability. In 2011 there were 37 vendors that self-identified as “data loss prevention.” This year (2017) there were 126 – out of 687 total exhibitors. To be fair, the space has changed considerably with many security products adding integrated DLP functionality. But still, is it necessary (or even helpful) to apply the term “data loss prevention” to a multinational consulting firm, a leading server manufacturer and a major security vendor that has actually opted out of the DLP space? (Yes, RSA still self-identified as “data loss prevention” in spite of the fact that they pulled out of the DLP marketplace a couple years back – the one notable “death” in the DLP space.)

I know it’s more complex than that. In the end, don’t ALL security products help prevent data loss? Isn’t security ultimately about protecting your data? Yes. But let’s leave the DLP moniker to those products and features that are designed specifically to prevent data loss.

For a review of leading DLP vendors and their capabilities, you can download the DLP Experts DLP Vendor Review document.